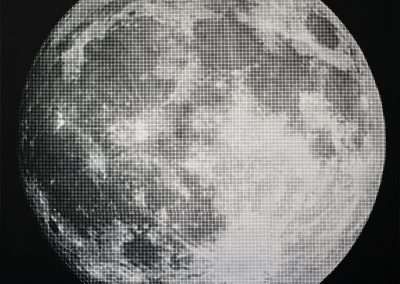 Biography
William Betts (b. 1964) explores the possibilities of the digital age by using innovative techniques that include proprietary software, laser cutters, CNC technology, and a self-designed complex robotic system for painting. For the moon series, Betts deconstructs his images in order to create photographic stencils that are based on the pixel grid, giving him the ability to scale the painting to its ideal size. Betts employs the robotic paint system to make the pool paintings which applies drops of paint to the canvas one color at a time – one drop at a time. Up close the images are lost in pointillist fields of color. From afar, the paintings become photographic images of leisure, showing anonymous people floating in sparkling blue pools.

William Betts was born and raised in New York City. He graduated with honors from Arizona State University in 1991 with a BA in Studio Art and a minor in philosophy.

Steeped in superstition and intrigue, the moon is a fascinating subject; we all see the exact same thing and yet it means something different to each of us. It fosters events and marks time. It is an empty vessel onto which we can project our imaginings and see exactly what we want. Each moon painting is based on a photograph of a different moon and each photograph—like each stencil—is only used once. This makes each piece—like the full moon itself —a memory of a specific place and time and a memento of a life event. —William Betts

2014 That’s Where You Need to Be, Richard Levy Gallery, Albuquerque, NM

2019
to the moon and back at Richard Levy Gallery

2007
View from the Panopticon at Richard Levy Gallery