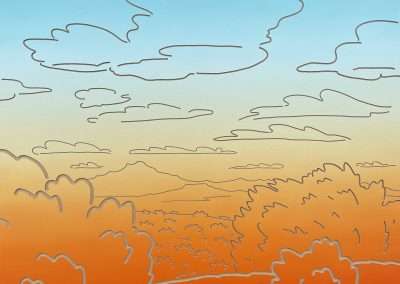 Biography
Sean Hudson (b. 1983) paints transcendental landscapes that represent fleeting moments and are studies of atmosphere, light, and space. Hudson’s animated scenes of the high desert illuminate the relationship between land and sky. In this Router Paintings series, he carves lines into the surface of painted panels using a router saw to form images of land, sky, expansive horizons, and portals. By employing unusual techniques like drawing with a router saw or painting at a small scale, he draws attention to the physicality of each painting.

Sean Hudson is an artist and educator based in Albuquerque. He holds an MFA in studio art from the University of New Mexico and a BFA in painting and drawing from the Rocky Mountain College of Art and Design, where he studied under the painter Clark Richert (1941–2021). He was featured in New American Paintings and has shown his work at numerous galleries including The Valley, Taos, Friend Of A Friend, Denver, and Smoke The Moon, Santa Fe.

Central to my creative vision is the threshold, depicted as archways, cacti, or silhouetted trees. These elements act as entrances and invitations, not just into the painting, but metaphorically into the future, a path forward. Everything is still and in motion simultaneously—the perspective of the spirited mind, and from it, spirited artwork. – Sean Hudson