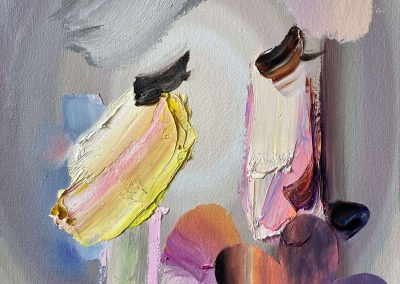 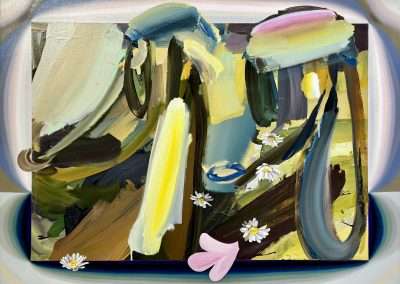 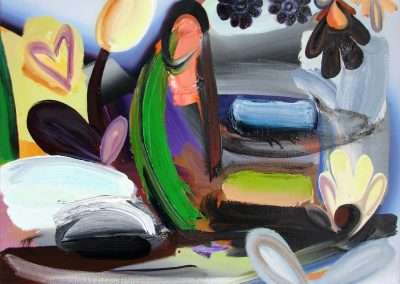 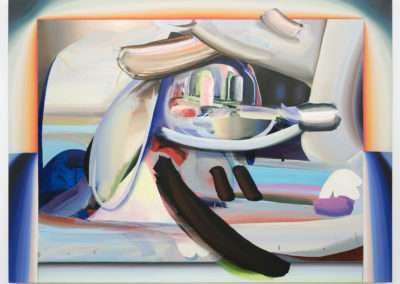 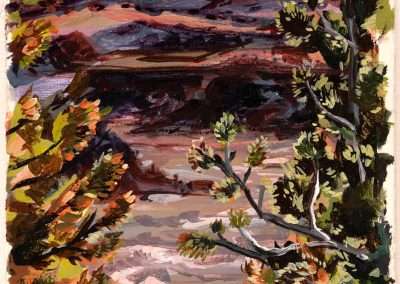 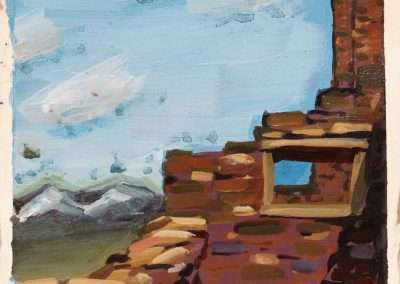 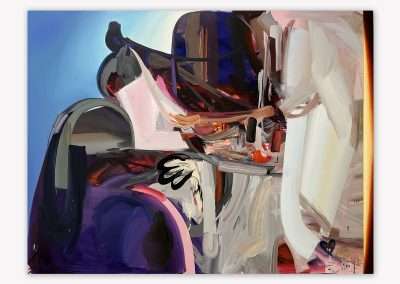 In Yows and Jammers Stine begins with paintings made directly on postcards of landscapes and rivers and then makes larger paintings based on these cards. She thinks about her representations of nature as abstractions. Her paintings are self-referential, repetitive, and constantly evolving.

In her vision paintings series, Stine explores the mechanics and limitations of vision. By recording color and light, she unveils the slippage of visual thresholds. Each composition is contained in a portal-like border of color gradients.

Throughout her practice, Stine’s paintings often include references to dogs, whether it be a subtle floppy-eared silhouette in the gestural marks on the top layer of the canvas or a realistic snout. Her masterful technique hides the abstract dog form in plain sight. Painting pets is often regarded as taboo and sentimental making Stine’s work subversive in nature.

Raychael Stine’s work was published in multiple issues of New American Paintings and included in the Texas Biennial. She is a recipient of the Dallas Museum of Art Degoylier Grant, the Stone Award Scholarship at the University of Illinois at Chicago, and the Gendler Fellowship as artist in residence at the Bemis Center for Contemporary Art in Omaha. Stine is an assistant professor of painting and drawing at the University of New Mexico.

“The gradient for me is more about old-school painting devices, areas around the edge that used to be naturalistic, kind of trompe l’oeil floats. So, rather than trying to create a frame of a narrow space behind the painting, so that it looks like a painting of a painting, and actually represents weird, narrow passages of space, I started thinking about creating that same kind of edge—but what if it didn’t depict naturalistic space and instead was pushing up against other areas? So the paintings are often called Jammers or Yows”.
-Raychael Stine, studio visit interview, THE Magazine

2006
Ambush(Stand and Deliver: Your Money or Your Life), Road Agent Gallery, Dallas, TX

2002
Turn it up, University of Texas at Dallas Visual Arts Gallery, Richardson, TX