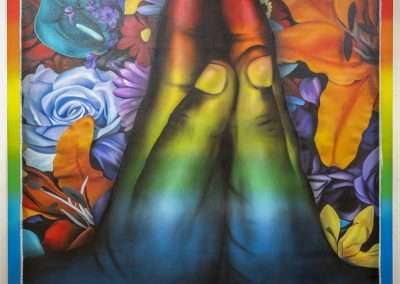 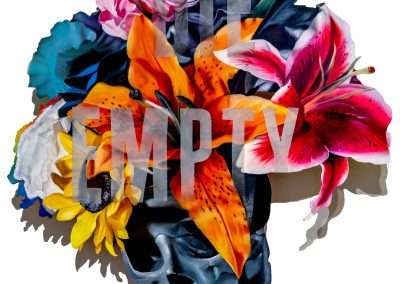 Biography
Noé Barnett is an emerging painter and important figure in the mural community in Albuquerque, NM. His unique life experience has given him the ability to see both sides of a very polarized society and uses his work as a bridge between diverse communities.

Unity is a dominant theme in his projects as he strives to create opportunities where deeper conversations can be achieved. In the wake of recent police shootings, one of Barnett’s most recent murals, “Over Come” was executed in Albuquerque to literally “shed some light” on the history of the civil rights movement. Barnett integrated faces of both victims of racial inequity and important leaders of social justice from the past 60 years. In doing so, he invites his viewer to contemplate why recent reactions are not about singular events but to generations of infractions. Layering paper faces and painted text, iridescent spray paint was strategically applied so the words “Over Come” appear when the mural is illuminated by light.

In his studio practice, Barnett works with light as both a subject and a medium. Striving to include different perspectives, each piece is a painted representation of the visible light spectrum. His work provides space to consider what it is like to be Black in our current times and more specifically how cultures can come together as a community and stay in the light. Barnett serves as a mediator in much of his work by focusing on what is shared and providing space as a catalyst for growth.

Other public projects include the New Mexico United Mural, Hometown Heroes, and Can You See Me? – all which have received much attention from the press. He has exhibited in the southwest and currently lives and works in Albuquerque, NM.