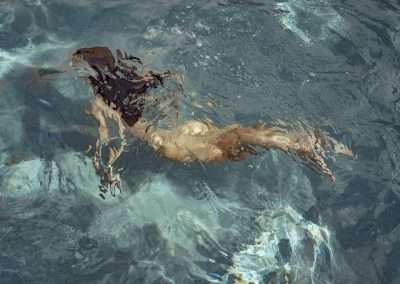 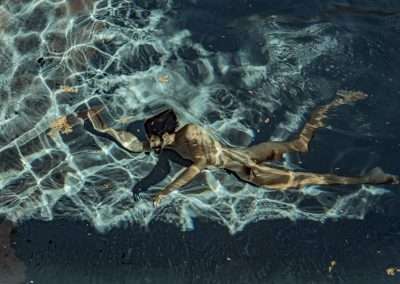 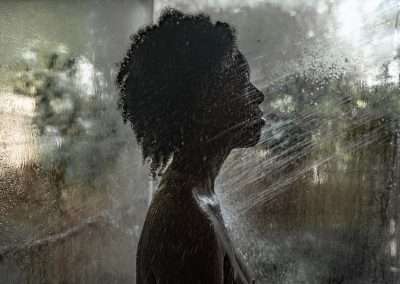 Biography
Manjari Sharma addresses issues of identity, multiculturalism, and personal mythology in her photographs. In her new series Surface Tension, Sharma further investigates the relationship between figure and water which depicts abstracted images of figures refracted by the watery surface of a swimming pool. The idea of water being holy is a traditional belief in Indian culture and a conceptual thread that permeates much of her work.

Manjari Sharma was born in Mumbai, India, and moved to the US in 2001. Her Shower Series and Darshan series have garnered much attention and have been written about by the New York Times, the Los Angeles Times, CNN World, NPR, Life Magazine, and Forbes India, among many others. She has received the First Place Curator’s Choice award from CENTER in Santa Fe, and was selected for the New York Times Portfolio Review. Sharma currently lives and works in Los Angeles.

I’ve been studying the relationship of people with water since 2009 and in my newest iteration, I have turned my lens to the disassembled human form. When the outer plane gets punctured, an inner world appears. Figures turn into landscapes, limbs into fins, bodies become amorphous, and the mind wanders into the ether. The window between this submergence and emergence is unpredictable and unrepeatable. —Manjari Sharma

2015
Selected for On Our Radar Creative Capital Artist Feature

2007 Selected by Steve McCurry to research a National Geographic Project based in India, New York, NY
Invited to be interviewed on CNBC Awaaz, Mumbai, India,