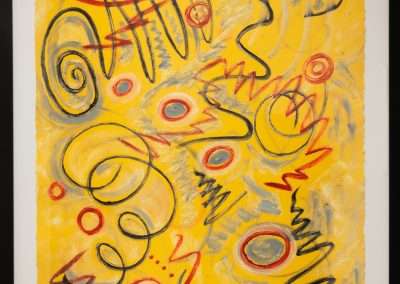 Biography
Linda Lomahaftewa (b.1947) is a mixed media artist with a focus on painting and printmaking. Her practice is centered around the concept of landscapes and often includes or is inspired by symbols from her Hopi culture. Pandemic Yellow IV is from a series of monotypes that started out as scribble drawings and represent the colors of the four directions from Hopi culture. Each color symbolizes a different direction. In Hopi belief, Yellow symbolizes North, Red is South, Turquoise(Blue or Green) is West and White is East. With each direction comes knowledge. These prints were created during her artist residency with IAIA and were printed with former student and master printer Michael McCabe.

Linda Lomahaftewa (Hopi/Choctaw) has had a lustrous 60 year career as an artist and educator. She began her career as early as high school when she moved from Phoenix to Santa Fe to finish her studies at Institute of American Indian Arts (IAIA) as one of the prestigious academy’s first students. Where she later taught for more than 40 years. Lomahaftewa has exhibited nationally and internationally and has been in numerous traveling exhibitions. Her work has been published in multiple books and is in many collections. She has been listed in Who’s Who in American Arts and twice in Who’s Who in American Indian Arts and won the Robert Rauschenberg Foundation’s Power of Art Award. In 2021, IAIA Museum of Contemporary Native Arts presented a retrospective for the artist, The Moving Land: 60+ Years of Art by Linda Lomahaftewa. The artist lives and works in Santa Fe.

With monotypes, you kind of have to work fast. It’s instant painting almost. There’s more gestural movement in the prints. – Linda Lomahaftewa

1996
I Stand in the Center of the Good, Group exhibit in conjunction with publication of book by Lawrence Abbot, American Indian Community House; New York City