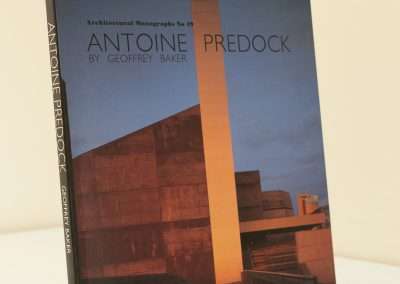 This publication is devoted to the work of Antoine Predock, an American architect based in Albuquerque, New Mexico. This monograph includes previously unpublished images and line drawings, which should present a greater insight into the working methods of the architect. Among the projects featured are the Turtle Creek House in Dallas, the Nelson Fine Arts Centre, the National Archives of Denmark and the Arizona Science Centre.
From the Inside Flap:
Architectural Monographs No 49 Antoine Predock ‘While Frank Lloyd Wright’s organic architecture opened buildings to the landscape a century ago. Predock’s shamanistic architecture opens them to the myth and mysticism of land and culture.’ Joseph Giovannini, Architecture, December 1993. This new monograph on the work of Antoine Predock reveals the width of vision of this internationally celebrated architect based in Albuquerque, New Mexico. Having first gained his reputation in the American West and Southwest with works which connected with their unique spiritual and historical contexts, he has in the last few years proven his singular and perceptive approach worldwide. Projects featured here include the Nelson Fine Arts Center, Arizona; the Palm Bay Complex, Morocco; and the Rosenthal House, Los Angeles; as well as the more recent National Archives of Denmark and Arizona Science Center. Predock is known for emotive architecture inspired by its site and immediate cultural influences. Its impact is effectively communicated in this book through extensive illustrations which include large-format colour photographs and detailed line drawings. The conceptual ideas and practical considerations behind each building are discussed in project descriptions which are complemented by critical appraisals from the architectural press. The broader philosophical context of Predock’s architecture is addressed in Geoffrey Baker’s introductory essay, where it is considered in terms of Heidegger’s views. Baker also traces the themes behind the buildings and discusses the design process developed by the architect. He places the work within a tradition of building characterised by architects such as Alvar Aalto, Louis I Kahn, Sir Edwin Lutyens, Frank Lloyd Wright and, more recently, Glenn Murcutt. In an in-depth interview with Predock, Baker takes many of these ideas and theories directly to the architect. For Baker, ‘Predock’s work maintains elemental simplicity and directness with a complex layering of messages rather than parts.’

About the Authors
Geoffrey Baker has taught architectural design, history and theory for over thirty years. Since 1988, he has lectured at the School of Architecture, Tulane University, New Orleans, where he currently holds the Richard Koch Distinguished Chair. He has also served as Distinguished Visiting Professor at the University of North Carolina, Charlotte. His publications include monographs on Frank Lloyd Wright and Le Corbusier as well as numerous articles on the works of leading contemporary architects. The highly successful Architectural Monographs series focuses on individuals of international stature who have been influential in practice and in education. Each monograph is designed to reflect the style of the architect featured, providing an invaluable record of the work and an important source book for further study. Recent monographs include: Philip Johnson No 44 Carlo Aymonino No 45 Santiago Calatrava No 46 Imre Makovecz No 47 FTL No 48